Coaxial speaker cable is popular these days. It can transmit video and audio signals and TV antennae, cable boxes, modems, and speaker cables.

A male RCA port is generally available on both ends of a coaxial speaker wire. It is famous for transmitting lossless sound signals and is robust to interference.

If you want to learn more about this tool, you’ve accessed the right page. This article will look at the cable in great detail, including its components, materials, types, and usage. Let’s read on to discover!

What Is Coaxial Speaker Cable? 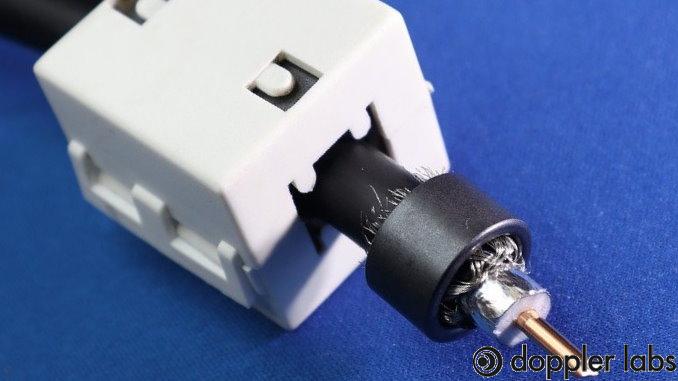 What is the cable, and how does it work?

A coaxial speaker cable (also known as a coax cable) is an electrical cable capable of transmitting RF (Radio Frequency) data from a supply to an input device with its coaxial connector.

The RF signal’s frequency will include the top reaches of the audio spectrum as well as the lower rates of the infrared range. It translates to a frequency range of 20kHz to 300GHz.

This tool has been one of the most popular wires in every residence since the turn of the twentieth century, especially with the development of televisions.

The phrase “coaxial” refers to the cable’s entire construction regarding technical terms. It has a woven copper protective layer that wraps around the inner cable core (copper cable) and a dielectric insulator (foam-like substance).

A plastic jacket covers the interior of the wire to protect humans from being shocked by it.

The main distinction between these cables is that coaxial speaker cables can send digital signals. As a result, they provide greater bandwidth to offer a more stable connection.

Compared to standard audio cables, the external cable has a higher level of strength and power. 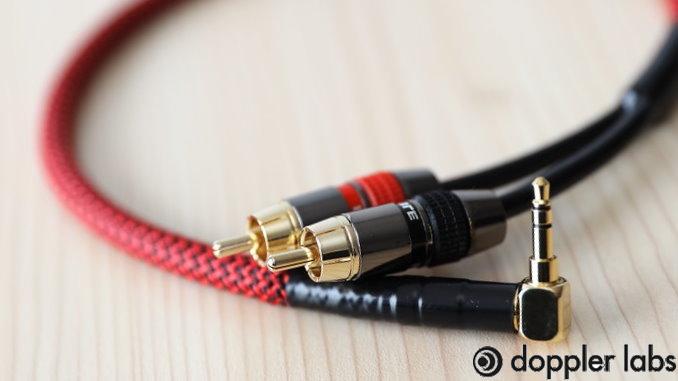 The digital wire can transfer any digital or electrical signal. It often works for transmitting audio and video signals.

This wire efficiently sends a digital signal through electrical pulses, although they are not really digital inside.

Digital coax cables have the same construction as the standard ones. Each depicts a wire in the middle surrounded by insulation, plastic wrapping, and a metal cover.

These cables stay shielded from interference and have a high impedance to power. They can also accommodate a broad spectrum of electrical frequencies.

Components Of A Coaxial Cable

The form of coaxial wires is plain and cylindrical. They come in a variety of colors and thicknesses. Also, their structures might be simple or sophisticated, but they all include four primary components, including:

Copper is the main material for making the core. You can also come across the center made of stranded copper or copper-plated steel.

The dielectric insulator surrounds the core conductor. The materials for this part are diverse, such as foam plastic and solid plastic. Sometimes manufacturers leave the gap between the core and insulator blank.

Shielding can be as thick as four layers, with two aluminum foil and two twisted copper wires.

The final layer of the cable is the jacket, which is mostly PVC (Polyvinyl Chloride).

The jacket comes from fire-resistant, oxidation, and UV-resistant material. Sometimes it’s even water-resistant, depending on the application. 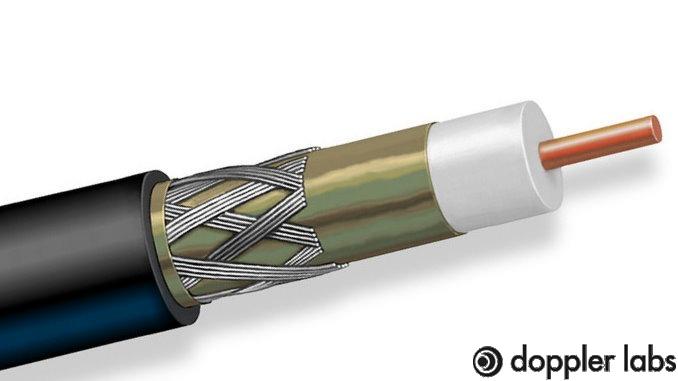 There are multiple layers within the wire

The coax cable works by sending data in the core. The shielding sections around it minimize signal loss (known as attenuation loss) and assist in decreasing EMI.

The first layer, which is the dielectric, is in charge of separating the two layers.

The outer layers are responsible for keeping radio transmissions and electrical impulses out.

There are two ways to classify the coaxial cables: based on construction and impedance.

According to their construction, there are five primary varieties of coaxial cables on the market.

The flexible coax cable has a braided outer conductor formed by fine wires, the most prevalent coaxial cable form. The braid gives the cable enough elasticity.

However, it does not provide sufficient protection. As a result of the microscopic gaps inside the braid, RF waves may seep through the shielding.

The semirigid cable has a strong, cylindrical metallic external conductor that resembles a pipe in shape. These cables have a consistent characteristic impedance as a result of their construction.

They also have fantastic shielding. However, this feature comes with a compromise on elasticity.

One conductor acts as a signal foundation, while the other serves as the earth ground. As a result, there is increased insulation and noise resistance.

A set of insulators shares an external conductor in every Twinax wire. The conductors inside may get twisted or parallel to one another.

There are two types of coaxial cables based on impedance: 50-Ohm and 70-Ohm.

High-frequency digital broadcasts and Ethernet networks both utilize these connections.

Cables with an impedance of 75 ohms are common for household uses.

Audio/video broadcasting and telecommunications are popular applications. You can also find them in RF video signals and television systems.

Apart from these two types, there are others, such as 52 and 93, which aren’t often popular in public. 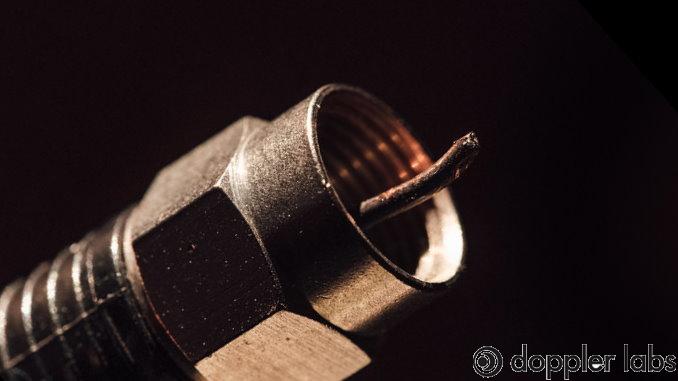 Coaxial cable connections make linking the cable to other gadgets easier. These connections can specifically keep the speaker cord shielded.

The following are some examples of coaxial speaker cable connectors:

SMA (SubMiniature version A) is the most popular connector for RF uses. The SMA connection can deal with a wide range of frequencies, from 0Hz to 12GHz. 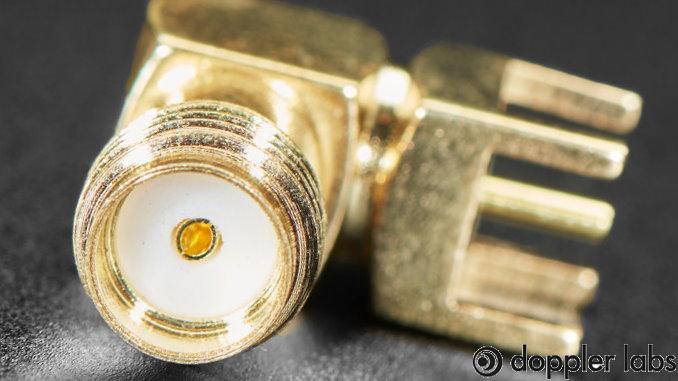 SMA is the most popular model

Threaded Neil-Concelman is the threaded variant of BNC connectors. When contrasted to BNC connections, they typically work at higher microwave frequencies. 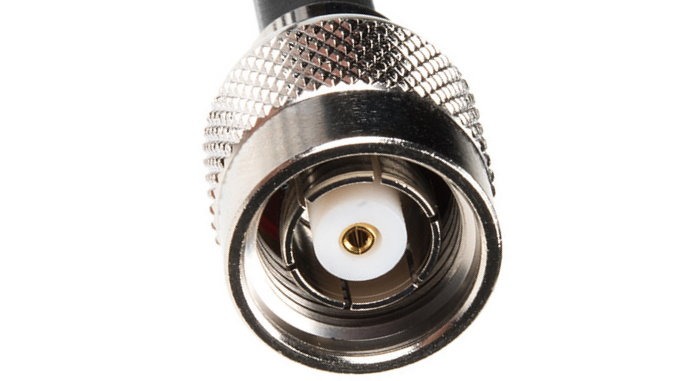 Subminiature version B are smaller variants of SMA connectors. They’re popular since they provide exceptional electronic properties from DC up to 4 GHz.

QMA connections have the same internal construction as SMB. These connections, on the other hand, allow faster locking and detachment.

They are most popular in military applications, mobile networks, and antenna networks with several transmitters.

Cinch connections are another name of the RCA (Radio Corporation of America). They employ cables with yellow, red, and white wires that attach to the back of televisions.

These cords also feature a snap-on pairing for simple installation.

How To Use Coaxial Cable As A Speaker Wire?

A coax cable can work a speaker wire. Some manufacturers even provide coaxial speaker cables.

On Amazon, for example, a company named WBC offers these products. Mogami W3082 wire and Eminence gold-plated plugs can work in their cables.

The company utilized two cords for each loudspeaker. It crossed-connected one wire’s shielding to the other wire’s central conductor and conversely. 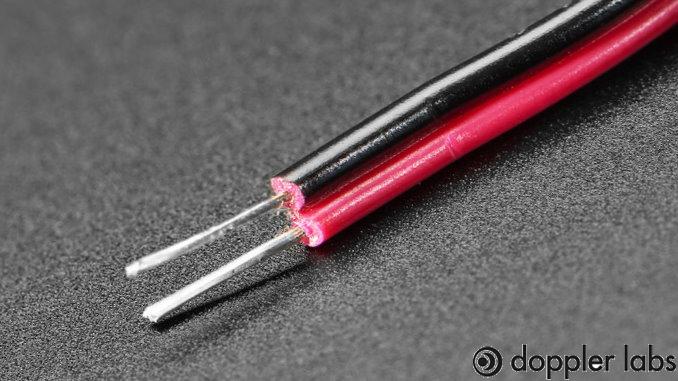 You can utilize the coax wire as a speaker wire

You may take easy steps to turn your present coaxial cable into a usable speaker cable.

Most coaxial cables used in most homes have two connections on each end for joining the output and source devices. In this case, you need to remove both.

The average length of these cables available on the market nowadays is roughly six feet. It would help if you first determined the size of the wire for your speaker arrangement.

Take the jacket out.

Remove the coaxial cable’s shielding before it can work as a speaker connection. You may accomplish this task with a ringing tool or a regular kitchen knife.

After removing the jacket, you’ll need to undo the shielding lightly. Then, it can serve as the wire for the speakers.

You’ll need a wire stripping tool to perform this step since you have to get the core cable within the insulator. 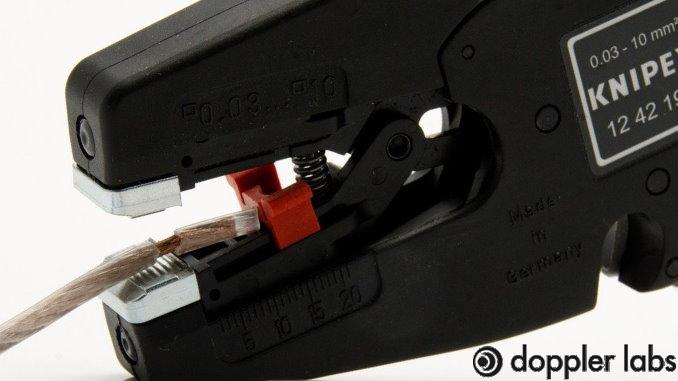 The stripping tool is necessary for the project

How To Use Monster Bluetooth FM Transmitter

How To Use Single Jack Headset On PC Without Splitter

How To Tell If HDMI Cable Is 2.0? A Complete Guide For Newbies

What Is An HDMI Cable? Overview & How It Works [A Simple Guide]

How To Choose An HDMI Cable? Some Tips To Bear In Mind

How Long Can An HDMI Cable Be? All Things You Need To Know

Pros And Cons Of Using A Coaxial Speaker Cable

Even though it is an old piece of tech, it is still common in many sectors throughout the world for daily tasks and procedures.

The primary reason for this popularity is because using a coaxial speaker cable has a lot of advantages that outweigh the disadvantages.

There are many benefits to expect if you invest in this tool, including:

Since everything has two faces, you should also prepare for the drawbacks when buying these cables.

Users have shown their concerns about the coaxial speaker cable. Here are some of their frequently asked questions.

1. Is coaxial the same as RCA?

Coaxial and RCA cables are similar in shape and size of connections. Both have a 75-ohm impedance; therefore, you can use them interchangeably. They also have the same bandwidth.

However, RCA wires are thinner than coaxial cables. To prevent interference, they contain the same insulation as coaxial wires.

Because coaxial cables can transfer digital data, they can convey 5.1 channel audio via one single line. In RCA cables, this operation is not possible.

You have known basic information about the coax. So, let’s talk about optical and HDMI for this question.

An optical digital interface uses light as a channel for data transfer. The transmission takes place through optical fibers inside the speaker wire.

Unlike coaxial connections, optical versions prevent noise from getting to the DAC circuitry.

The bandwidth of this connector is limited. As a result, it is incompatible with lossless sound formats.

An optical connector can accommodate up to two raw PCM sound channels.

HDMI has a considerably larger bandwidth than coaxial and optical connectors.

Another advantage of having an HDMI connection is handling both new and old video formats.

Which is the best?

A coaxial connection has more superb sound quality than an optical connection. As a result, the output might be more precise.

However, in today’s world, convenience is essential. Thus, HDMI is the best of the three options. It is suitable with any modern audio-visual device.

The HDMI connection can also minimize speaker wire clutter due to its upgradeability and ability to handle audio-visual.

You can learn more about the differences between these wires from this video.

3. Is the coaxial speaker cable worth it?

Some people hesitate to choose between the coaxial speaker cable and the regular speaker wire.

In most cases, the price difference and the inconvenience are insufficient to justify the difference in the price of these tools.

However, several users said that switching from a standard 14-gauge speaker wire to a coaxial one improved their stereo systems considerably.

The most excellent advice is to give them a shot and see how they perform. Then, you can determine if your choice is worth it.

Coaxial speaker cables allow for the flawless transmission of audio signals. They also deliver exceptional audio that can run even the most advanced audio and video systems.

Hopefully, you will find this article helpful. If you need any further information, please feel free to ask. Thank you for being interested in the post!